skip to main | skip to sidebar

The Company of Solitude 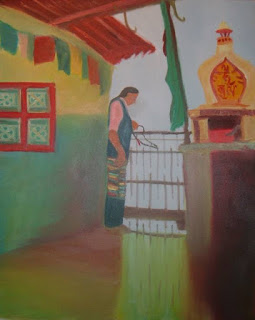 We all need heroes, don't we?

Rickie Lee sang about that,
"When I reach across the galaxy,
I will miss your company."

Company is all relative, you say
Even the robin knows.

***
The oil painting is of Ama Adhe on the roof of the old Reception Center in Mcleod Ganj. She is a famous Tibetan freedom fighter who spent 27 years in prison before coming to India where HH the Dalai Lama appointed her to aid the children who escaped from Chinese-occupied Tibet. I will never forget her kindness, calm and solidity.

Posted by Stirling Davenport at 12:47 PM No comments: 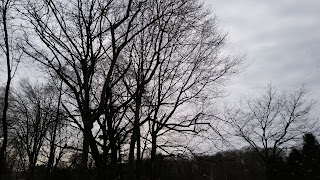 The evening sky hovers
Between melodies
Sounds only meant for grass
Or breathing trees
The air a dense vibration
Each mote – happy clouds of diadems
Invisibly aligned
Communicating in their own excited language
Thankfully graced in time
Without extension or evidence
Yes …
Unbelievable love just swells
A moment spirals up like smoke
A memory or premonition
The smell of a cotton shirt
Fresh denim jeans
The coffee grounds of morning
Such images stirred together
And swimming in forever.
Are you there, Oberon?
Could we dance again?

Posted by Stirling Davenport at 5:22 PM No comments: 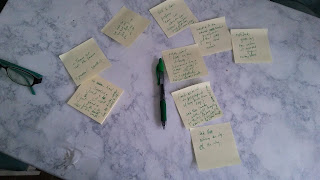 I dreamed I suddenly remembered I had to be at a poetry class and I was late.

I threw on some clothes – an inappropriate mix. Red, black and white poodle skirt (remember those?) – a ruffled white blouse (I would never wear). Gold leather boots. Black beret. I stuffed a random notebook into my green shoulder bag and ran for the subway. (I always notice colors.)

When I got to the college, I went through a turnstile and then up to the second floor looking for the classroom. I saw a doorway that looked familiar from the day before when I had showed up - a day early but on time. A number 208 was above the door, which I thought was right.

(I wished for the hundredth time that I was an absent-minded professor, because that's the way my mind works.)

The professor had already started the explanation of the assignment. I squeezed into a seat and saw that everyone was getting out their notebooks, and I did, too.

The assignment was to write a poem in a particular style that I’d never heard of before. It was called a name I can’t now remember (penerella, veniera, pavia?). And I whispered to the guy next to me, “What was that?” and he mumbled the name just as vaguely.

The professor heard me and came over and nodded to me. "What?"

I said, “I’m not familiar this poetic style. Did you say it was ‘paean’ or something?”

And he said, “Paean. Can you spell that?”

He sort of mumbled the answer (again!) and then continued with his presentation to the class. He read an example of this type of poem, and it was a brisk description of an encounter with a woman on the street, with a vivid image of a green lamppost that hadn’t yet been lit and a gray sky. And then the narrator revealed that he was forcing himself on the woman.

And the professor recited, “We had sex! We had sex! And then it was fine. It was right, and we went our separate ways.” It was clear that the poet made excuses for what he had done to the woman, and that the style of poetry exposed a moral issue.

It reminded me of an incident in my youth when I had just smoked a joint with a friend in St. Louis. (He was a Taurus, but not the Taurus.) And I had one of those “Aha” moments that sometimes happens on grass. I said, “I just realized a truth.” And my friend said, “A moral truth?” And I wondered, at the time, if all my truths were moral truths, and I was dismayed by the idea.

But now the professor has asked us to start writing, and I had a keen desire to write, and I knew what poem to write for the assignment. I opened my notebook but I couldn’t seem to find an empty page. I flipped through the book and realized it was the kind of notebook that non-writers give to writers. It had decorations on every page, and most of the decorations were woven ropes of twine that made narrow margins down two sides of every page. There was no open space.

After trying to write inside those narrow margins, I gave up and started writing on the blank cardboard back of the notebook.

“I’m on the subway, harassed by a beggar – and feeling so torn about it – and sympathetic. But as always, broke (and we’re all so preoccupied with being broke these days), and then counting out the right change for the bus before leaving the subway so I wouldn’t have to open my purse on the street and nobody would rob me. And this was so wrong somehow, but I hadn't a way to fix it.

And then I saw the sky.

That’s when I woke up, and I lay in bed trying to keep writing the poem, and looking for another blank page to write on, and wondering if possibly I could remember the poem later. And of course, I only got a bit of it.

I don’t know what prompted this dream. A desire to write a poem, for a start. And as my poems are usually the result of days and weeks of psychological imprints, I’m not immune to the effects of what we call our shared reality.

So, I have, among other things –

I have the accumulated perception crowding in my mind - like sardines flopping on the deck - like autumn leaves continually gathering on the ground, no matter how many times you sweep – like wineglasses in the sink from the night before –

The mental detritus from listening to the impeachment hearings and the continual wrangling and interpretation afterward, the commentary that seems to want to possess the truth (the moral truth) –

And I’m left with the impression of those people testifying – agile goldfish swimming in and out of the camera's eye, navigating through political seaweed - their light forms so stark against the dark water, like visitors from another world. (Not our world, surely.)

And what poem could possibly do justice to that?

Posted by Stirling Davenport at 2:39 PM No comments:

You can find links to my published writings at: wildsparrowpublications.com. These include two fantasy novels, a collection of short stories, and various stories and poems in anthologies. Also check out the link to my son Miles Ballew's children's book "Too Many Friends" with his great illustrations. My mainstream novel is out to agents, looking for a publisher. As always, writing is my calling, painting is my dharma, and I walk in nature to clear my head. The rest is just fiction.